Recent media focus on aircraft tracking technology underscores significant gaps in traditional approaches (radar, transponder, Automatic Dependent Surveillance-Broadcast (ADS-B), and radio communication). These technologies, or combinations of them, are typically used by the scheduled commercial air transport sector. The gaps are particularly relevant when tracking aircraft in remote areas where traditional tracking infrastructure can be limited, for instance outside radar coverage.

An alternative – satellite tracking technology – has been quietly tracking aircraft in other market segments for decades with great success and reliability rates. Satellite tracking was first developed and adopted over twenty years ago because no other technology was practical due to size, weight, or cost constraints. In some cases, for example aerial firefighting, flight tracking is now mandated by many aviation authorities because it offers the best solution for tracking complex low altitude aviation operations in remote locations with the possibility of congested airspace and potentially limited visibility. For off-shore oil and gas operations, satellite tracking is the preferred solution because it offers reliable tracking where there is often no radar coverage due to offshore, sea level landing pads and ‘over-the-horizon communications’ are not always available. In other cases, such as Air Medical Services, satellite tracking simply fits the cost, size, weight and operational requirement perfectly.

The reliability, simplicity and cost effectiveness of satellite tracking systems raises key questions about why this technology is not used for scheduled commercial air transport sector.

SKYTRAC Systems Ltd, a leading provider of aircraft tracking and aviation data solutions has been in the business of flight-following, monitoring flight data, and supporting aviation business’ for over twenty years. The high-tech company based in Kelowna BC has a global customer base of hundreds of operators who rely on SKYTRAC’s innovations to ensure they know where their aircraft are at every moment of flight. What started out as a simple GPS-based aviation tracking system 20 years ago has developed into a complex and far-reaching flight monitoring capability that offers unforeseen advantages to operators all over the globe.

“We offer a simple and effective tracking solution to our customers” stated SKYTRAC CEO, Stephen Sorocky. “Typically our customers are in the oil and gas, leasing, firefighting, medevac, charter, news or police aviation sectors. These operators regularly fly below radar coverage – if radar is even present – and often out of range of effective radio frequency communications, so they have sought solutions that offer them critical connectivity during their missions. They rely on our small, lightweight systems – no bigger than a toaster and weighing approximately 2 kilograms – to provide minute-by-minute tracking and to integrate flight data into their business operations on the ground. Besides tracking, our real-time data helps them with fundamental business operations such as billing, tracking pilot flight hours, or documenting passenger or cargo manifests. We also provide invaluable information for aircraft maintenance programs – engine data, fuel data, and other critical flight system data – all transmitted off-board in real time.”

SKYTRAC’s products are certified by Transport Canada, FAA, EASA, and ANAC so there are no regulatory barriers to installation on aircraft. SkyTrac’s ground-based software SkyWeb connects with the on-board hardware. SkyWeb provides mapping as well as a long list of smart tools to ensure there is a two-way information flow between the ground and the aircraft.

With low-earth orbiting (LEO) constellations there are no ‘blind spots’ or gaps in global coverage, and SKYTRAC’s data centers have multi-layer redundancy to ensure 24/7/365 coverage. Using LEO constellations, aircraft of any size can be tracked, monitored and connected from any internet access point.

In addition to continuous tracking of aircraft position and aircraft data, over the years SKYTRAC has built in intelligence to automatically transmit alert messages if unforeseen events take place (commonly known as ‘exceedances’). Anomalies as simple as straying outside a flight corridor, flying too fast at low altitudes, or missing a way-point can trigger an instant alert to a flight following ground station or directly to your cell phone. Other exceedances examples include (but are not limited to) abnormal altitude/speed combinations, landing gear position, flaps, engine temperatures or cockpit warning light status, excessive maneuvers or aggressive changes in attitude.

In a recent real-world case study, an aviation accident emphasised the criticality and utility of the SKYTRAC tracking system. The tragic accident involved a helicopter crashing into water in an extremely remote area. In this case there were no distress calls or other emergency notifications by the crew. SKYTRAC’s system was the first to raise the alarm due to an exceedance being automatically tripped by SkyWeb. Within minutes of the accident, an automatic notification was sent to the flight’s tracking team and this alerted the team that there was a potential problem with the flight. Upon quick reference to SkyWeb the ground team quickly ascertained the last know position of the aircraft so an immediate search and rescue team was dispatched to the crash site. In this case National Search and Rescue assets were alerted but did not launch due to the speed and pin-point accuracy of the tracking team in reaching the crash site. Without the SkyTrac system the emergency notification would not have been received quickly and the location of the crash site would have been near impossible to find quickly or easily. The aircraft would have eventually been reported as missing but valuable time would have been lost and there would have been no solid clues as to where to start the search.

“Our technology brings benefits such as real-time business system integration and flight data monitoring, but at its core it provides a clean, simple real-time tracking capability,” says Sorocky. “This technology is readily available today, affordable, light weight and provides 100% global coverage for aircraft no matter where they are flying.”

Even with sound reasons to use satellite tracking technology in the commercial air transportation sector, it is seldom used. Sorocky explains, “The commercial airline industry has traditionally used a combination of older technologies to track their flight operations. There are long term fixes on the horizon but today and for the foreseeable future there are large gaps in global tracking coverage. Despite compelling new technology and some early adopters, the scheduled commercial air transportation sector has been slow to adopt satellite tracking. We are making steady progress in this sector and we believe it is only a matter of time before satellite tracking technology is on every aircraft.” 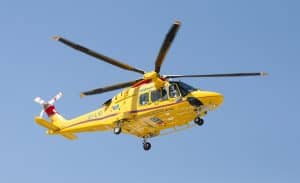